I've been ruminating on this for weeks, so I thought I'd post something about it here. In general I tend to believe that misogyny is a bigger problem than sexism, and I'm fascinated by what it means for people to be fully-actualized versions of themselves out in the world, liberated from social expectations based on sex or gender (or race or ethnicity or or or...).

So read on if you dig that shit.

My recent four seconds of fame on Last Comic Standing (which you can watch here, starting around minute 6) featured precisely one joke from my act. I loathe writing out my comedy, but since I had to type it up for standards and practices anyway, I'll just go ahead and copy-paste it here:


I’m married. To a man. I have a husband. I know, a minute ago I said I was bisexual, and now I'm talking about my husband. I guess it is confusing. The truth is, I dated women for years, and then I met my husband, and I was like, “Wow...... Close enough.”

After the episode aired, my real live actual husband received some gentle ribbing from his pals. One texted, simply: "close enough." Another posted "close enough" on his Facebook wall. A guy friend of mine pulled me aside and said, "I watched Last Comic Standing. I wish they'd showed more of you! They only aired the one husband-bashing joke."

Now, I'm not going to pretend that line gets laughs from a super enlightened place. "LOL, he's emasculated!" is at least part of the reaction. I often follow that up with my bit about how much said husband loves Jane Austen. Comedy comes from life, people.

But the truth is, my husband does have a lot of the qualities our society tends to associate with the feminine, and he decidedly lacks a lot of traits and interests that your typical "man's man" is expected to possess.

The dude really really loves Jane Austen. And he's quick to laugh at my dumb jokes. A partner who strokes my fragile comedian's ego is both absolutely essential and a traditionally female role to play. (He calls himself my "comedy wife," as in, "You head backstage. I'll go sit over there with the other comedy wives.")

He doesn't watch professional or college sports, and he knows next to nothing about any of them. He understands all the rules, but when it comes to players, stats, or even team names, he's just not that into it.

Even though he's an introvert, he's so kind and sweet that most anyone who meets him warms to him immediately. He has a disarming smile and a gentle nature. He loves birds and plants and books and baking.

And, perhaps most incredibly, he deeply, in his very soul, does not give a fuck what you think about any of that. I've never met anybody so effortlessly confident in liking what they like and being exactly who they are. 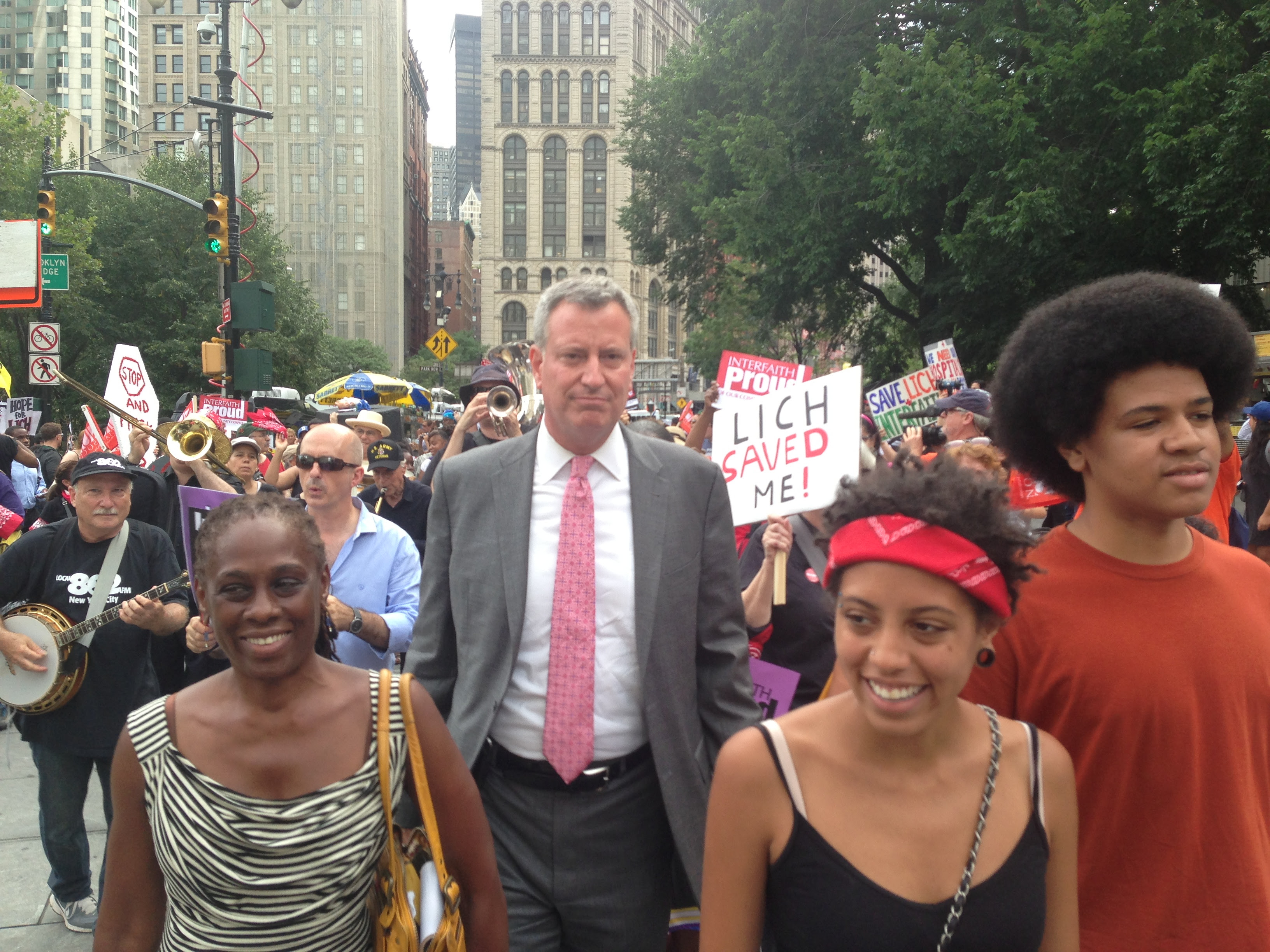 There are a lot of women who used to date women and wind up with a male partner. Chirlane McCray, the First Lady of New York City (pictured above with her family), leaps to mind as an example, and I know many others personally. Generally, those male partners tend to be open-hearted feminists who have no interest in traditional gender roles. They tend to be dudes who don't need to learn to respect women because to do otherwise would be unfathomable to them. They tend to be men who hear female voices in meetings, laugh at women's jokes, read female authors, and watch movies and TV shows with female protagonists all on their own. In short, they treat women like peers. Equals. Friends. Human beings, even.

Now, it's possible to be a woman and date a woman who treats you with a lack of respect. It's a sad fact that misogyny -- which I define as the hatred and fear of women coupled with the denigration of the "feminine" human traits that all people share -- creeps into plenty of lesbian relationships. Fortunately, the relationships I had with women and the ones I saw around me were, first and foremost, friendships. They were romances between peers, where neither person was expected to ask the other out or pay for dates or be the first to call or text after sex. Once you've had that -- once you've really escaped the gender politics of sex and dating -- it's generally not terribly tempting to go back.

Is my husband a "Real Man?" Well, it depends on who you ask. My husband is taller than me and very strong from doing squats and dead lifts. He's been known to trek out into the backwoods for more than a week at a time or chill out in a hut in the Panamanian jungle for a month. He loves Jackass and owns three huge red boxes full of tools that he actually knows how to use. Then again, if "Real Men" love Jesus, then he probably doesn't qualify. (My husband likes Jesus, but only as a friend.) Nor does he keep his quiver full or try to rule over our household.

But what is this obsession with being a "real man," anyway? As Ta-Nehisi Coates points out:

Men who have no horse in the "Real Man" race are the ones who get it. And there are many, many such men. I'm lucky to call lots of them my friends. My old pal Myq Kaplan tells jokes about it. (Watch the whole clip, but especially the part around 02:50.)

For a lot of people, calling a man "woman-like" is an obvious dig. The opening line from the Disney movie Planes is a clear example. But, from my perspective, "close enough" is not an insult. "You're like a woman" is only an insult if we accept that a woman is a low-status and weak and generally bad thing to be. I love women, especially women who also toss aside gender expectations and walk around being exactly who they are, without apology.

One last thing: The first time I ad-libbed the "close enough" line, my husband was in the audience. I made eye contact with him from the stage, and it just kind of flew out of my mouth, as if it were an inside joke between us. "You HAVE to keep that line!" he insisted after the show. "It's hilarious!"

So I did. What kind of a wife would I be if I failed to submit to my husband's commands?

No, I did not get a speeding ticket. I traversed the continent.

I have a strong impulse to list every place we went and name-drop every friend and relative we stayed with or visited, but I doubt a straight-up trip log would be particularly interesting to anybody who isn't me. Beyond that, I'm afraid my reflections on the trip would read like those of a wide-eyed undergrad returning from study abroad: "It was aMAzing. Like I like can't even, like, describe it, you know? Like. It was THAT amazing."

I did learn a few things, though, and I figure a quick bulleted list never hurt anybody:

* Airbnb is fantastic and communitarian and offers the most interesting and reasonably priced places to stay everywhere in America. It is truly a game-changing travel resource.

* I developed some one-pot recipes for camping and backpacking that I'm sure I'll use throughout my lifetime. The critical ingredient in most of them is couscous, or, as I call it, "Lightweight Miracle Dots!"

* ATTENTION COAST-DWELLERS: Visit your college friends who live in the Midwest. They're tired of schlepping to New York or San Francisco to see your hipster ass. Plus they have an embarrassment of extra space.

* If you've ever kayaked ever once in your life, then you are no longer a beginner kayaker. So don't sign up for the "No Experience Necessary!" group tours, lest you find yourself acting out like a soccer hooligan during the poor guide's safety spiel.

* We are truly in the midst of a stand-up comedy boom/renaissance, and it is happening everywhere. If you find yourself in Western New York, go see Josh Potter or Mark Walton or Rick Matthews. Want some night life in Wisconsin? Check out Nick Hart or Sarah Connor or Greg Bach or Stacey Kulow, and definitely go to the fabulous Comedy Club on State. I met and watched so many exciting, interesting, funny comics on this trip. Cities like San Francisco and Minneapolis and Chicago are known for their strong comedy scenes, and they're great, but places like Madison and Buffalo (and Syracuse and Knoxville and Raleigh and and and...) are excellent comedy towns in their own right. It's a wonderful time to be a comic or a comedy fan. Or both. Like me.

...and, perhaps most importantly:

* Find a way to break free. Whether you're taking a day trip or a long weekend or a week or a month or a year, whether you're traveling by car or plane or bus or train or subway or bike, whether you have endless resources or a super duper tight budget... just GET OUT of your routine. Do something different. Go outside. Check out the free shit to do in your town. Find a nearby city or even a new neighborhood that you've never visited and just go there. So many of the "shoulds" in our lives involve adhering to our routine, spending MORE time at home or at work or at the gym or in any of the inherently limiting and circumscribed venues of our daily lives. Getting out of those patterns and places and known knowns opens you up and makes you feel so, so alive.

Ahh, the mountains of Montana!

Now, if you'll excuse me, I gotta go harvest some limes from our backyard here in LA.