Not enough of a big deal is being made of the fact that the professional baseball player who just won everybody in America a free taco from taco bell by stealing a base has a name so easily turned into an ad slogan by said fast-exican food empire: Jacoby Ellsbury becomes Tacoby Bellsbury with just two little tiny letters. 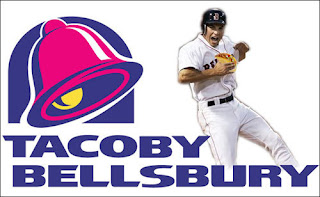 There are plenty of other speedy Red Sox who could have stolen the first base of the series, but no name is so easily transformed into the name of the beneficent chain. I mean, think about it: Dustin Pedroia is pretty speedy, but who likes the ring of Dustaco Belldroia? Julio Lugo can haul his skinny ass mighty quick, but nobody would even recognize such a mangled transformation as Bellio Taco, or Taquio Bellugo. I guess Coco Crisp could morph into Taco Crisp (or perhaps Tacoco?), but the Bell part still has basically nowhere to go.

As you can see, I have hereby proven that all major league baseball is fixed by corporations.