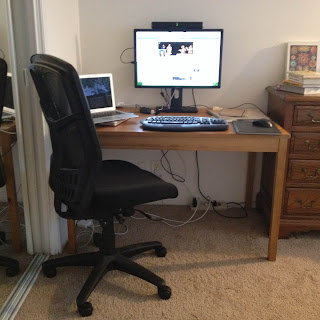 After writing and editing an entire novel in hotel rooms, friends' homes, Airs BnB, and my dining room table, I figured catch-as-catch-can was good enough. When we moved into our new home in California last December, I decided I'd be fine continuing to operate without a designated space for my artistic work.

Stand up comedy has certainly taught me to value no-fuss, low-overhead creativity. All you need is a mic! And a little lighting! Maybe a stool! Stools are optional! Even conjuring my friend and mentor Salome Gawkerton, Internet Feminist requires little more than a hair tie and a pair of broken sunglasses.

But, as 2015 rolled on, I found I wasn't making a whole lot of headway on my second book. That brilliant new pilot script remained confined within the squishiest regions of my grey matter. I re-designed my whole website, but I did so hunched over my tiny laptop keyboard while sitting in a dining chair. When November came around and my husband asked me what I wanted for Christmas, the indignity I'd been steadily subjecting myself to boiled to the surface. "I think I need a desk," I began. "It's been pretty hard using the table," I admitted. I felt an upwelling of hyperbole in the pit my stomach, headed directly towards my vocal chords. "This situation is impossible!" I insisted, my voice trembling, at my poor agreeable spouse. He just stared at me, wide-eyed, as I leapt to my feet, rent my garments, and wailed: "I'm a FUCKING NOVELIST! And I don't even have my own GODDAMN DESK!"

Then I swept out and I took to my bed.

The day after Christmas, we visited every used furniture store in West LA, to no avail. We followed that up with a particularly depressing trip to the high-end Helms Complex, where I was silently mocked by $580 worth of Scandinavian particle board. Instead of pulling the trigger on an antique dinette table or a piece of children's furniture that costs more than my entire wardrobe, I turned to dear ol' Uncle Craigslist, and I found the perfect thing, just posted, down the street, for twenty bucks.

Over the past year, I've been adjusting, moving, changing, finding my way. That's what we do every year, of course, but I've spent 2015 navigating a new coast, a new job, a new schedule, a new life. I journaled and meditated and read Jung. My soul tends to tell me what it needs.

And, at the dawn of 2016, what my soul needs is a desk. The first person who has to take my art seriously is me. If I'm reluctant to invest time, resources, energy, and effort in my work, then everybody else will be too. And if I don't make the space, literal and metaphorical, for my creativity, nobody's going to do it for me.

So I encourage you to find your own metaphorical desk this year. It doesn't have to be big or fancy or expensive or Swedish. It just has to matter.

During last night's debate, W. Kamau Bell inspired the hashtag #WhitesAgainstTrump, and I was happy to chime right in. I LOVE it when standing up for all that is right and not fascist is not only fun but SUPER EASY, and that's especially true when it involves sitting on my couch in my yoga pants with a glass of wine typing <140 characters! Hooray for me! I #hashtagged! I'm an activist!

In seriousness, it's always eye-opening for white people to see how non-white folks characterize us as a group, since we're this privileged class that gets to exist, often utterly oblivious as to our outward collective identity. But Kamau's call to whites to topple Trump made me think, and it made me realize that my state of disgusted alienation from Trump's supporters is actually a big (perhaps the biggest?) part of the problem.

I gotta say, deep in my heart... I'm not just disgusted by Trump-supporting white people. I'm worried about them.

My grandmother watched the entire Republican convention in 2012. It was the television highlight of her year. My mother's partner's parents, who lived next door, watched Fox News all the time. Patton Oswalt has complained publicly about Fox News with a fervor that only those with loved ones in its grip can muster. Most white people I know have family members, even close family members, who live in that cognitive hellscape.

But how many of those white, solidly middle-class* people who have been watching Fox News for the past 15 years are sincerely happy? Do they feel safe, secure, comfortable? Did they under George W. Bush, or were they kept nice and terrified back then too? Roger Ailes and his ilk have poisoned countless minds with frightening falsehoods and imprisoned otherwise prosperous individuals in a psychological cage of intensifying hatred and paranoia. Paranoia is a fucking diagnostic criterion for mental illness. It is not a happy, healthy, positive, reality-based state to be in.

So what we have is a bunch of people, many of them with respectable 401Ks and savings accounts, who can get brand new knees and guzzle Lipitor and live comfortably for decades, and they're miserable. They're angry all the time, they feel disenfranchised, and it's partly because the "information" they've been given 24 hours a day is utterly misaligned with the direction of our country. If the "information" Fox presents as true actually were true -- if climate change weren't real, if Iran were allowed to have nuclear weapons under Kerry's deal, if Syrian asylum-seekers were mostly radicalized ISIS loyalists entering the country unvetted by the hundreds of thousands -- then every decision the Obama administration has made would seem fucking insane. Seriously, try empathizing with that for a second. Millions of Americans' current psychological state -- paranoia and resentment and seething frustration and fear -- is actually, to some extent, the logical conclusion of all those lies.

Since the Iraq invasion I've been somewhat obsessed with questions of the nature of truth, about what people are inclined to believe, about confirmation bias and other ways our brains are "designed" to retain false beliefs. I try my damndest to remember that my own mind is a not crystal-clear chamber of logic and veracity either.

My white family members (or high school acquaintances, etc.) who follow Trump think I'm naive AF. They think I've been brainwashed by college (you know, the one that those self-same family members were so determined to get me to). That's the assumption most of us #WhitesAgainstTrump are facing.

But those of us who have watched relatives get progressively angrier and more racist have first-hand knowledge of one thing, for damn sure:

Standing up for non-white non-Christian Americans is not something we must do solely for the benefit of those non-white non-Christian Americans. We need to do it for our families, for our disjointed communities, for sanity, for human happiness, for our own hearts and souls. And I'm ready to do more, not just by Tweeting into my personal echo chamber, but on stage, on the page, and in tough conversations with the people I encounter.

I want to say something about how I'll put my body on the line and fight, too, in the streets and in every way possible. But honestly, I don't know where to put it. I remember during the anti-globalization movement stuff back in 1999, a Civil Rights-era activist who spoke to my coalition explained (and I'm paraphrasing): "A movement doesn't consist of demonstrations. You have a march or a protest to demonstrate that there is a movement."

So how do we build a movement to oppose Fox News, and other profiteers in the Big Paranoia concern? It's certainly a matter of interest to people on all sides of the political spectrum. But I'm against censorship, obviously, and I also don't think that MRE companies are gonna pull their ads any time soon. The prepper phenomenon illustrates that the paranoia industry is substantial.

So what do we do? I welcome your suggestions.

*I know there are many MANY thousands of broke, pain-pill-addicted, underemployed, traumatized veteran, and/or otherwise marginalized white people out there who also harbor these paranoid beliefs. And yes, I want to help them. In addition to supporting VA expansion, drug treatment programs, tax breaks for the poor instead of the rich, public education, and Medicaid expansion, I think fighting the Fox News agenda, in whatever law-abiding free-speech-affirming way we can, will help them too.
Posted by erin at 11:22 AM No comments: